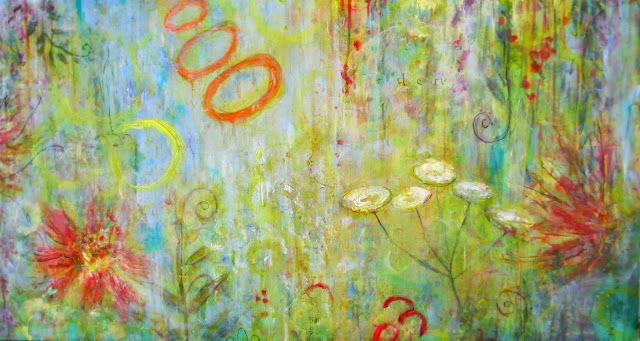 no one ever asked me did I have a purpose, no one ever
wondered was there anything I might need,
for there was nothing
I could not
love... ~ Meister Eckhart, excerpt from 'When I Was the Forest"

Spring blooms here in the mountains, and I'm able to move outside to paint, listen to the fish pond splashing and birds sing as flowers delight senses. While not a typical 'plein air painter' as many would think, I truly am: most of my works are created outside, influenced by nature and all that's going on. In new paintings, wisteria drips, a bee disappears among vines, ferns float, hints of blue sky and sunshine glow. Sometimes pink honeysuckle, lavender sprigs, seed pods, bee balm, mysterious life forms appear. Many layers, like the earth herself, form the surface: some worn down, some built up. I want the viewer to be here in that moment, to walk 'into' the painting and be a part of it. My latest "Songs of the Earth" painting has "e d e n" in the paint. Meister Eckart would understand.
Posted by Bohemian Artist: Bonnie Joy Bardos at 10:25 AM

I gratefully accept donations of any amount to help buy art supplies and survive in order to keep making art in a world that needs it. You may also purchase artwork through this PayPal link. Easy!

Link To My Newspaper Columns (below)